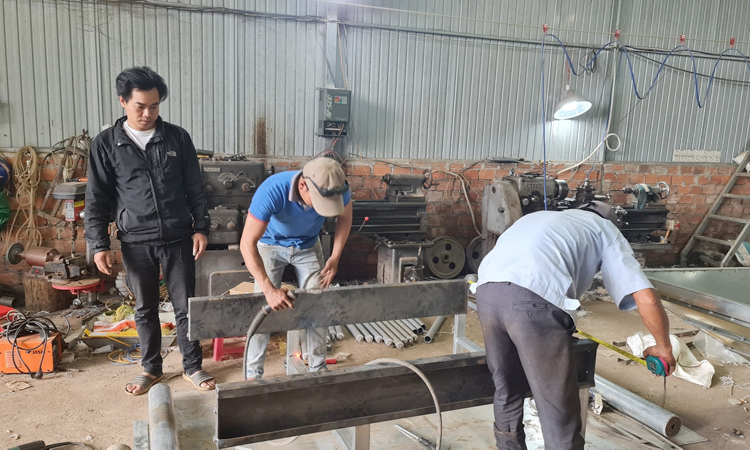 Lam DongHe dropped out of school and worked as a teacher, even though he just graduated from high school, and returned to his hometown Long to become an ‘engineer’ to build agricultural machines.

For several months now, Nguyen Kim Long, 30 years old, in Pró Kinh Te village, Pró commune, Don Duong district, has been shuttling back and forth between the factory and a 3-hectare field of tomatoes and chili a few kilometers from home. The vegetables obtained from there, besides being sold to traders, the main purpose is to make “test objects” for their own sorting machines before being sold to the market. “Last year my factory built about 30 machines to sell to people. This year we hope this number will increase,” Long said.

Seeing what this young man is doing, the villagers are still surprised, no different from the fact that they “could not believe” the story that Long, a good student, suddenly dropped out of school 16 years ago. At that time, no one knew why “the Dragon” was so reckless, so the older brothers went to look everywhere, for a whole month they saw me staying 50 kilometers away, bringing me back forever. Parents, siblings and the teacher were out of persuasion, but he decided not to go back to school. “You can do whatever you want,” his mother gave up.

“It is not because Long is greedy, but likes to work and earn money. In the first month, he made 600,000 VND and brought most of it to her mother to spend,” said Le Anh Thinh, a close childhood friend of Long shared.

At 15 years old, Long worked as a hired laborer, wandering around Lam Dong province and Ho Chi Minh City. No one expected, with empty hands and determination, this young man became the director of a complex specializing in manufacturing and improving agricultural machines, producing a variety of automatic agricultural product classification machines, sowing and grinding. land … sold throughout Don Duong district, as well as vocational training for local youth.

In the early years of dropping out of school to make money with superficial thoughts, Long worked as a laborer around near home. 16 years old, according to friends, he went to Ho Chi Minh City to work as a welder at bridges and roads. On a burning summer day when the outdoor temperature exceeded 40 degrees, workers like Long still had to burn their face on the construction site. Struggling, Long regretted his decision to quit school and realized “if you go to school, there will be more choices”. To correct the mistake, this guy’s backpack never lacks books and materials for self-study.

At the age of 17, once returning home, discovering printing needs in his hometown, Long gathered his savings and opened a printing factory for packaging and design for the shops. After a year of accumulating a small amount of capital, he “borrowed the land” from his parents and mortgaged a bank, took money to open a store to sell and repair phones and computers. Like tinkering, Long bought more books, went to the Internet to learn more about electronic repair. While studying and working for more than a year, the number of people using cell phones was limited in the poor countryside at that time, so the store was closed.

Seeing that he was weak, he did not have much experience, the second time Long wrapped his clothes in Ho Chi Minh City to find a job. Reading the notice of recruiting vocational teachers to repair phones and computers of a center, he risked to send his application even though he required a degree. Meeting the director, the young Long boldly: “I just finished grade 9, only have practical experience, not any degree or certificate. I can prove my skills right here”. After half a day of probation, he got a job with a salary of 9 million dong a month, the highest level in the center at that time. “This second “shot” helped Long become a teacher when he was 20 years old.

“Dad’s words are the motivation for me to return to work and decide to return to my hometown to start a business later,” Long shared. After his father’s funeral, at the end of 2014, for the third time, Long took his backpack to Ho Chi Minh City to apply to work as an electrical maintenance worker. During this time, he taught himself to program computers, did research, repair, and operate industrial machines. In early 2018, when he had a little capital and self-study experience, Long returned to his hometown to start his career. Not knowing what to do, he followed a cart of a friend who specializes in selling vegetables throughout Lam Dong province to learn.

For 6 months, Long realizes the limitations of the tomato picker that many farmers are using. The selection machine only reached 60% accuracy, the quantity of tomatoes was crushed, damaged a lot and the noise was very loud. With the knowledge of mechanics, electricity and electronics accumulated over 10 years as hired labor in Ho Chi Minh City, Long accepted the invitation to build a new generation machine for his friend’s family.

Being given 50 million in advance, only half the value of the machine, Long opened his workshop in his yard, borrowed tools, and repaired. Realizing the disadvantage of the tomato sorter at that time is that when running through the system, the fruit will be twisted, causing softening, crushed, rotten when transported away, Long overcome by using soft rubber to make ice. chain, using plastic wire to form a single fruit separating system, according to large and small slots … It takes another month to operate, overcome the disadvantages, the product is about 70% accurate.

After the success of the first machine, in September 2018, Long was determined to build a factory to manufacture agricultural tools, specializing in manufacturing agricultural machines. He hired 3 more workers, the first 6 months received 15 applications from people in the province. From two months, the time to complete a machine is reduced to half a month, accuracy increases to 80%. At the time of setting up the factory, Long worked daily from 7:00 am to 9:00 pm, working while training more workers. Long machines are very popular with farmers. Orders are constantly coming to hand, in 2019 alone, he has to hire 7 more workers, producing 30 large and small machines.

After more than a year of production, realizing that the machine uses a mechanical mechanism with a short lifespan, Long started working on a machine equipped with an electronic system, helping to classify many different types of agricultural products according to size. and color through automatic camera recognition system.

The desk was moved to the middle of the workshop, when a new idea was formed in his mind, instead of drawing on paper or on a machine, he directly fabricated, working day and night. As a result, not only tomatoes but many other fruits when passing through this machine, the computer will recognize the size, color, accuracy up to 95%.

In 2019, Long won the first prize in the Second Lam Dong Province’s Creative Entrepreneurship and Idea Contest and represented the province to attend the 6th National Advanced Youth Congress in 2020. He is creating jobs. stable jobs for 15 young people, average salary of 8 million per month.

In the afternoon of October, heavy rain fell on the roof of the factory, but Long worked diligently with the team to complete the final details of the machine to be delivered to customers. It was quite cold outside, but his forehead was sweaty. “Being able to do things you love is happiness,” said Long.