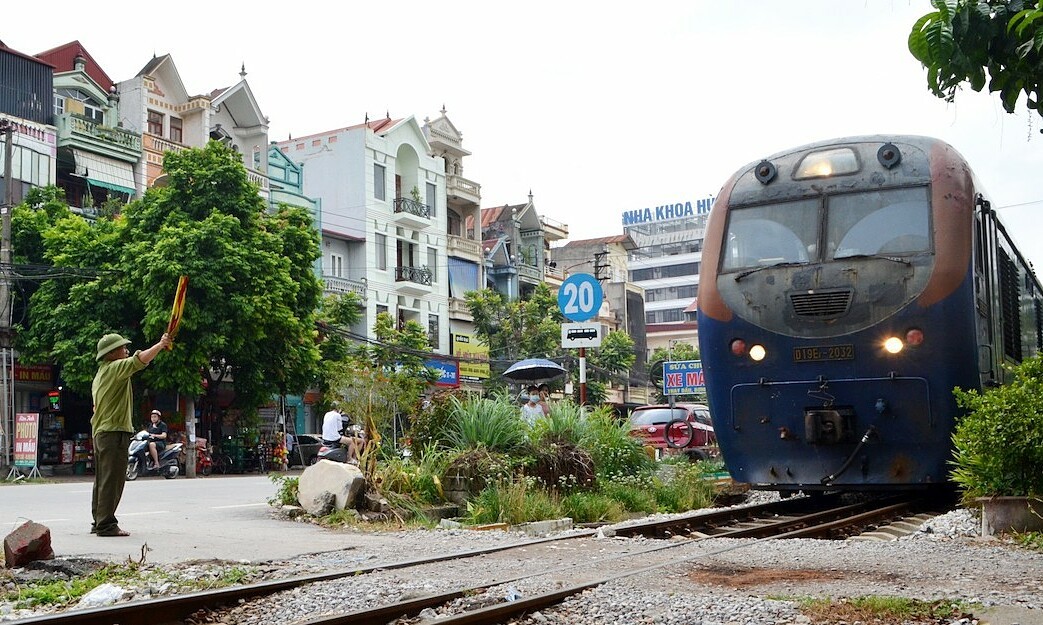 Bac GiangAt 11:30 a.m. on Saturday, while eating a meal, he heard the phone ring. Mr. Phuc reached for the whistle and two flags and ran to the train track about 200 meters away.

For 28 years now, people in lane 225 Xuong Giang street, Ngo Quyen ward are familiar with the image of a man appearing on the side of the road crossing the Hanoi – Lang Son railway, every time a train is about to run through. .

This crossroads is located in an area with a lot of traffic because it is close to two middle and high schools, right opposite lane 225 is Bac Giang bus station, so the traffic situation is even more complicated. Meanwhile, this section of the train does not have baries, barriers or railway staff on duty to warn.

In 1994, Mr. Phuc and his wife opened a noodle shop at the beginning of the alley to improve their income. From the day of the sale, he witnessed many tragic accidents due to lack of attention. So with the fan to fan the cake, the man who was once an information soldier voluntarily became the one who stood up to warn when he saw the train whistle.

“At that time, I simply thought, why do I have the condition that my house is nearby, so it’s convenient to keep an eye on the restaurant, but I don’t voluntarily stand guard and warn people from danger when the train arrives?” he confided.

But this act of Mr. Phuc at that time surprised many people. People wonder “I don’t understand why I go to work to eat at home, carry prison and general goods”. The 62-year-old man said that many times he had a grudge. Once he ran out and grabbed a woman’s hand who was trying to cross the railway, was scolded for thinking she was a “pervert”. It was only when the train crashed that he understood the reason and turned to thank him profusely.

Nearly 30 years of volunteering as a guard to block the train, Mr. Phuc does not remember how many lives he has saved. Most recently, Mr. Trieu Van Ngoc, owner of a car garage in Ngo Quyen ward, sat behind his sister’s motorbike. Because it was dark, he didn’t know a train was coming, so he decided to cross.

“At that time, Uncle Phuc shouted from behind, rushed forward to hold the steering wheel. The two brothers realized the train was coming,” Mr. Ngoc said. From that day on, he considered Mr. Phuc as a benefactor, a family member, visiting from time to time.

Those who were saved by Mr. Phuc included an officer in the railway industry named Tien. That time, Mr. Tien rode his bicycle across the railway. Although he knew the train was coming, he wanted to stop but the car lost its brakes. Mr. Phuc rushed to pull the bicycle back as the train approached. Too touched to escape death right before the death scythe, Mr. Tien rushed to hug Mr. Phuc, sobbing. On the 30th of that year, Mr. Tien’s whole family visited Mr. Phuc’s family and said thank you.

Many years of “carrying prisons and goods”, people around the area understand Mr. Phuc better. When someone crossed the street, they stopped their motorbike to shake hands, thank them and give money. Someone gave him a uniform for him to wear at work for easy identification.

Ms. Hong, who sells water in front of the gate of Bac Giang bus station, said that when Mr. Phuc did not come out to warn, fatal accidents happened a lot. “Tragic accidents have greatly affected me and many business households eating and drinking next to the bus station because people are obsessed with not daring to go back and forth. Since Mr. Phuc as a guard, the number of cases has decreased significantly, Our children and grandchildren go to school here and feel very secure,” said Ms. Hong.

Ms. Nguyen Thi Tan, vice chairwoman of Ngo Quyen ward, confirmed that Mr. Phuc had volunteered to work as a train guard here for a very long time and continuously up to now. “At the end of 2019, through the introduction of residential group No. 8, the ward signed a contract to guard the people’s passage through the railway at Lane 225 with Mr. Kieu Van Phuc with the same payment of 2 million dong a month”, the leader said. ward said.

Nearly thirty years of working here, Mr. Phuc said that he has memorized the time frames of the trains passing here, and can even recognize what kind of train is about to pass by the siren from afar.

“When I signed the contract, I was more motivated and realized that I needed to be more responsible for my work. But even without being paid, as long as I have good health, good eyes, and a good mouth, I will continue. fight,” he said with a laugh.