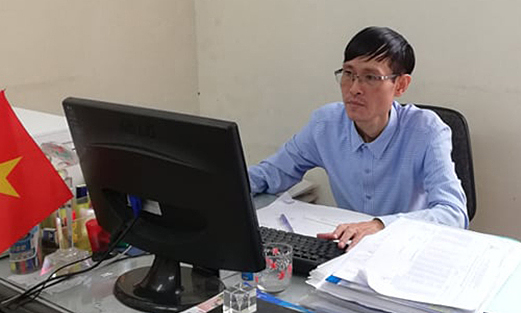 HanoiNguyen The Hung once thought 99.99% would die if he contracted Covid-19 but did not expect it to happen on his birthday, July 26.

The whole week before that, Mr. Hung was being treated at the Hanoi Lung Institute, which was the capital’s outbreak in July. The 47-year-old man, living in Long Bien district, had lost a lung due to chronic obstructive pulmonary disease. calculated since 2009.

“Now worrying won’t change anything. Optimistic fighting may still have a chance to survive,” he reassured his wife by phone when he received a positive result, related to a patient who had been treated at the Hospital. Hanoi Lung Institute.

The next day, when he was transferred to the Central Institute of Tropical Diseases, facility 2, he opened the phone to answer friends to wish him a happy birthday. He writes thank you notes, sometimes even joking. “This makes people think I’m fine and I have to keep my spirits up and fight the virus,” he explained.

On the second day, he had a high fever. According to the doctor’s prescription, he began to take the drug. Due to being treated for pneumonia, he was given antibiotics. The symptoms of Covid-19 are becoming more and more obvious such as fatigue, sore throat, bitter mouth. However, he did not dare to skip any meals because he understood that the greatest weapon in this battle was his own resistance.

Every day, he maintains the habit of walking along the corridor at least twice, practicing abdominal breathing twice, 30 minutes each time and keeping his body warm by wearing socks. The virus attacked more and more strongly, causing him body aches, weakness, dry mouth and tongue, and loss of smell. Every time he walked out the door, he coughed violently. Fortunately, the other lung showed no signs of damage.

In the hospital, Hung has to witness the thin line between life and death. The 80-year-old man in the room had to breathe oxygen but was still able to walk but suddenly fell in the bathroom. He left after a few days. That night, he couldn’t sleep.

In the following days, relatives kept asking, and someone cried on the phone, causing Mr. Hung to encourage him. Perhaps, because of his optimistic personality, he gradually adjusted his psychology, learning to be happy instead of sad. Fear only increases anxiety, he thought.

After 10 days in the hospital, Hung’s fever stopped, but he still had a lot of cough and headache. The strange thing is that the CT scan results show that the remaining lung is still undamaged. He admits it was a stroke of luck.

In the following days, waiting for a negative result, Mr. Hung still maintained the habit of going to bed early and tried to practice abdominal breathing as instructed by the doctor. On the 22nd day at the hospital, he got negative results for the first time. In this invisible battle, he is getting closer and closer to victory. That night, he summarized his experience on his personal page: “The virus is not so terrible for most healthy people. The body will be fine for a few days. For me, 99.99% chance of death but then Everything is fine, as long as the doctor’s treatment regimen is fully followed.” On the 28th day, when he received the third negative test result, he was discharged from the hospital.

The fact that Hung overcame Covid-19 is a miracle because, the Ministry of Health once warned, chronic obstructive pulmonary disease is one of 20 underlying diseases that are at risk of serious complications when attacked by nCoV. Doctor Pham Van Tho, a member of the “F0 Support Consultancy” group, said that for a person with only one lung left being treated for inflammation like Hung, if the virus accidentally attacks the lungs, the risk of death is high. will be very high.

Doctor Khong Minh Quang, who directly treated Mr. Hung at the Central Institute for Tropical Diseases, said that when “one lung is cut, the other is inflamed, the adherence to the standard Covid-19 treatment protocol is like taking With adequate medicine, on time, optimism and comfort are especially important to conquer disease.”

During 14 days of self-isolation at home, many times when he opened the window, he still had chills due to the sequelae of the virus. Where he lives is a peaceful alley, autumn with many yellow leaves, bare branches. “In the past, I didn’t pay much attention to it, but now looking back, everything feels strangely beautiful and the best thing is still living to enjoy it,” Hung said.

In his spare time, he tries to answer all questions related to the disease, relying on his experience to encourage and reduce the anxiety of patients. He believes that scientific prevention and treatment is the most important option to deal with Covid-19. Optimism and positivity are also indispensable factors. Nearly a month in hospital, the encouragement, visits, and devotion of relatives and doctors also made him feel that he was not alone in this battle.

A few days ago, Mr. Hung returned to work. He bought enough manga for his only son, as promised before. In a story book, he wrote a preface to his son, as a message to himself: “It is not because there is hope that people persevere in the fight, but because they persevere, they see hope”.