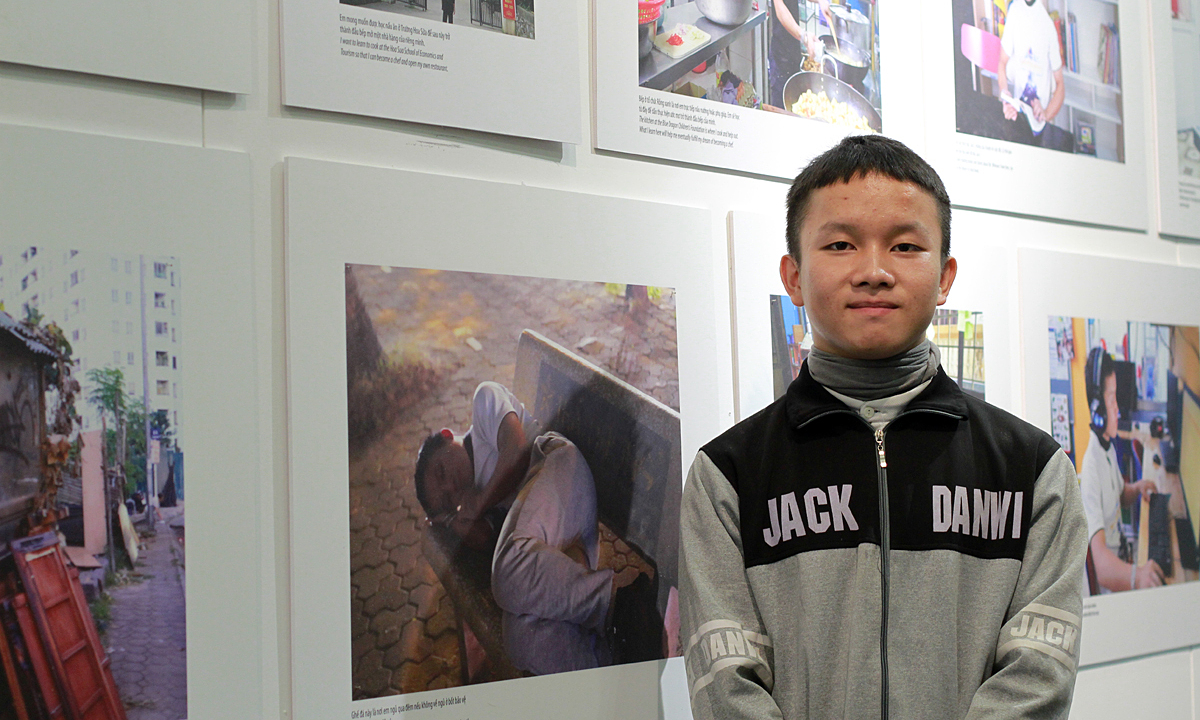 HanoiWhen he was discovered, Giang A Trinh was sleeping in an abandoned security booth on Thuy Khue Street. He was very scared and did not believe that someone helped him.

“The social worker was from Son La. At that time I was scared, but I thought that people from my hometown probably wouldn’t fool me”, Giang A Trinh recalled the rainy night two years before being Blue Dragon – Green Dragon Foundation, helping street children rescue – end his years of wandering the streets.

Trinh comes from a mountain village of Son La. In 2014, a 10-year-old boy followed his father to Hanoi to work as a construction worker. Father Trinh was addicted to smoking and was abandoned by his mother. His brother was picked up by the uncle to Dien Bien. “Four years ago my father told me to grow up, take care of myself, so I was wandering”, the 16-year-old boy said.

Since then, he often lives in the Thuy Khue area, Tay Ho, picking up scraps from the trash to eat, as long as he doesn’t get hungry. His sleeping place was an abandoned security boot. It doesn’t rain any day, Trinh sleeps on the bench.

When he was saved, Trinh was not used to it, so he was scared. Gradually, the care and attention of the social workers made Trinh trust him. Here he has friends and learns, changes his bad habits and swears. “I am very happy if I dropped out of school for 9 years this year,” said Trinh, currently in grade 3.

Having only been in school for 3 months, Trinh has cooked many dishes now and boasts of finding his passion. Along with studying culture and cooking, Trinh also helps cook in Blue Dragon and helps newcomers.

The Story of Giang A Trinh is one of more than 20 stories about street children on display in the “24 Hours on the Street” exhibition at the Vietnam Women’s Museum (Hanoi).

More than twenty stories are on display showing wandering kids capturing their previous lives. The photo of a boy sagging his bowl of noodles made many people stop. “I took a picture of eating this bowl of noodles because I can’t forget that the first day I went to the shelter I ate. Thanks to that bowl of noodles, I live until now,” said Mai Anh Tai, 13, a native of Bac Kan.

Tai was born but did not know who his father was, his mother left when he was only a few months old. But he is hot-tempered, just drink after he hits. Grandparents also kept drinking alcohol and cursing. “Then I left home and wander,” said Tai. The boy traveled through many provinces and cities and wandered into Hanoi. Here I get help for vocational training. I’m proud I like sports.

Phan Ninh, from Hoa Binh, chose to leave home when he had to grow up in a family with an addicted father, his mother married a new husband, he was not suitable for his stepfather. Going to Hanoi, Ninh lived on the street and slept under Chuong Duong bridge.

Once he was too tired to sleep in front of a restaurant on Hang Thung street. The owner of the shop has accepted to serve as a waitress. Later, Ninh was helped by Blue Dragon, had a close friend to play with and learned about photography.

This winter, Thuy and her grandmother no longer have to live in a temporary hut by the river. My mother left when Thuy was still red, her father had cancer when she was 4 years old. Having no money to rent the boarding house, the grandmother built a hut on the banks of the river, picked up bottles to feed Thuy. But her age is getting higher and higher, making a living is increasingly difficult.

Fortunately, the two grandchildren recently discovered and helped. Thuy’s grandmother opened a water shop and she continued to go to school. “I joined the class ‘confident to shine for girls’ and found myself more confident after the course. I also learned martial arts to protect myself,” the 9-year-old girl boasted.

Mr. Do Duy Vi shared that Covid-19 made many freelance workers reduce their incomes, lose their jobs, cause economic pressure, domestic violence and the number of children on the street increased. Blue Dragon has helped many children from the northern mountainous provinces and many children in Hanoi, who were not wandering before but because of Covid-19, they became street children. “Over the past 10 months, we have helped over 150 children,” said Vi.

The exhibition not only reflects hidden corners of danger that street children face, but also shows that dreams are being opened. “The exhibition helps us to understand and sympathize with the disadvantaged fates of the children and see our role in raising and helping children, so that children feel safe in their own family and community” Ms. Nguyen Thi Tuyet, deputy director of the museum, leader of the research team, shared.

See more photos of the exhibition “24h on the street”.