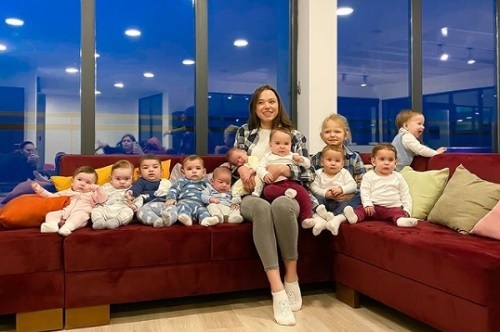 GeorgiaChristina Ozturk had a child at the age of 17. After marrying her millionaire husband, she has 10 other children, in just one year, thanks to surrogacy.

Their first child, Mustafa, was born last March. While the 10th child, Olivia was born last month. Christina and Galip Ozturk, 56, do not know how many children they will have together, but they certainly do not stop at number 10.

“I gave birth to Vika on my own six years ago. The rest of the kids are genetically ours, but someone else gets pregnant,” Christina said. She met her husband while on vacation in the city of Batumi, on the Georgian coast, which is known as the Las Vegas of the Black Sea.

To a 23-year-old single mother, Galip is “love at first sight”. “You are the mentor, the guide and also the prince in fairy tales,” she recalls.

As for the Turkish transport and real estate tycoon, Christina is the wife he has always wanted. The 56-year-old millionaire likened her to a “rough diamond” with a pure and kind heart. Although he was many years older than his wife and had a child of his own, Galip still complied with her, having with her many children.

Initially, they planned to have children every year. However, both realized that Christina was not capable of doing so. They are living in a country where surrogacy has been available to legally married couples since 1997. So the two chose this option. They go to a clinic, paying close to $ 10,000 for each pregnancy.

The clinic elects a surrogate mother and bears full responsibility for the process. The couple just needs to be a young woman, having at least given birth, not addicted.

“We do not know these women, do not have direct contact to avoid future problems. All connections are through the clinic. We just track the health index, make the menu complete, see. test results, “Christina said.

Someone took the surrogacy, but wanted to keep the baby. But genetically, the child belongs to the couple of millionaires and should be returned by contract.

People thought she was an upper class, she had an army of nannies to take care of her children, but Christina said she really spent the day with her children.