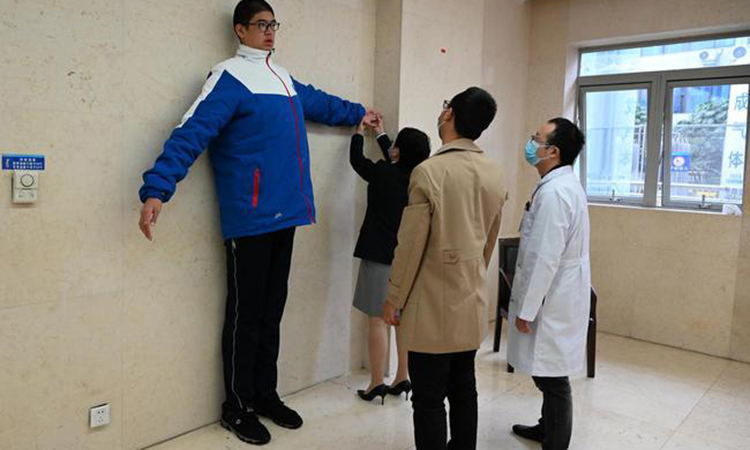 At 2.21 m tall, Vi Xiaowu, a 7th grade student in Leshan City, Sichuan Province is called the ‘giant’ or the tallest teenager in China.

On October 18, on his 14th birthday, the Guinness World Record came to Lac Son to certify that Xiao Vu applied for the record list of “The tallest teen in the world”. This title previously belonged to Kevin Bradford, an American 2m15 tall, but now this person is over 18 years old.

At school or residential area, Tieu Vu is always mentioned with the nickname “Giant 2 m”. To accommodate his height, desks and chairs are individually closed to custom heights. For the average person, the desk is usually 75cm high and the chair 45cm. However, the table height that this boy uses is up to 1m and the chair is 70cm.

Ms. Ngo Mai, 70, Tieu Vu’s grandmother, said her grandson’s height has increased by 20 cm in the past two years. The desk, bed, casual clothes or school uniform are custom made. “The bed is 2.5m long, the shoes go about size 56”, Ms. Vu said. His parents work away from home, now a 14-year-old boy lives with his grandmother.

In Mrs. Wu’s memory, Tieu Vu has an outstanding height since childhood. When he started kindergarten at the age of 3, the boy had reached 1.30 m. His family also repeatedly took him to the city hospital to be examined. At first, the doctor suspected it was a massive syndrome, but the test results showed that the growth hormone, pituitary … were all normal.

According to the doctors, Xiao Wu’s height can be genetically related because everyone in the family is superior. Grandmother Ngo Mai is 1.75 m tall, grandfather and mother taller 1.8 m, while father is 1.9 m taller.

For Tieu Vu, being tall has many advantages. “The windows in the classroom are always clean and the corner of the wall has no webs left,” the boy said with a laugh. In class, Xiao Wu is often assigned to clean windows, blackboards and cobwebs on the roof. The boy is very happy to help his teacher and classmates learn odd jobs. However, the oversized height also brings a lot of trouble. “I often get hit on the wall and it is very inconvenient to ride a car,” Tieu Vu shared.

What makes this little boy more annoying is always having to accept the curious gazes of passersby. In the minds of some people, great stature goes hand in hand with slow intellectual growth. The 14-year-old boy said that now he can only prove himself by practical action, which is the learning result. Because of that, Tieu Vu has always been at the top of the class for many years.

Because of her oversized height and having surgery on her legs, Xiao Wu is not suitable for playing basketball and other intense sports. This boy likes to read fairy tales and fiction books, and wants to become a sport player in the future.

Regarding the title “World’s Tallest Teen” by the Guinness World Records, the boy said it was just a title. “My task now is to study hard,” Tieu Vu said.