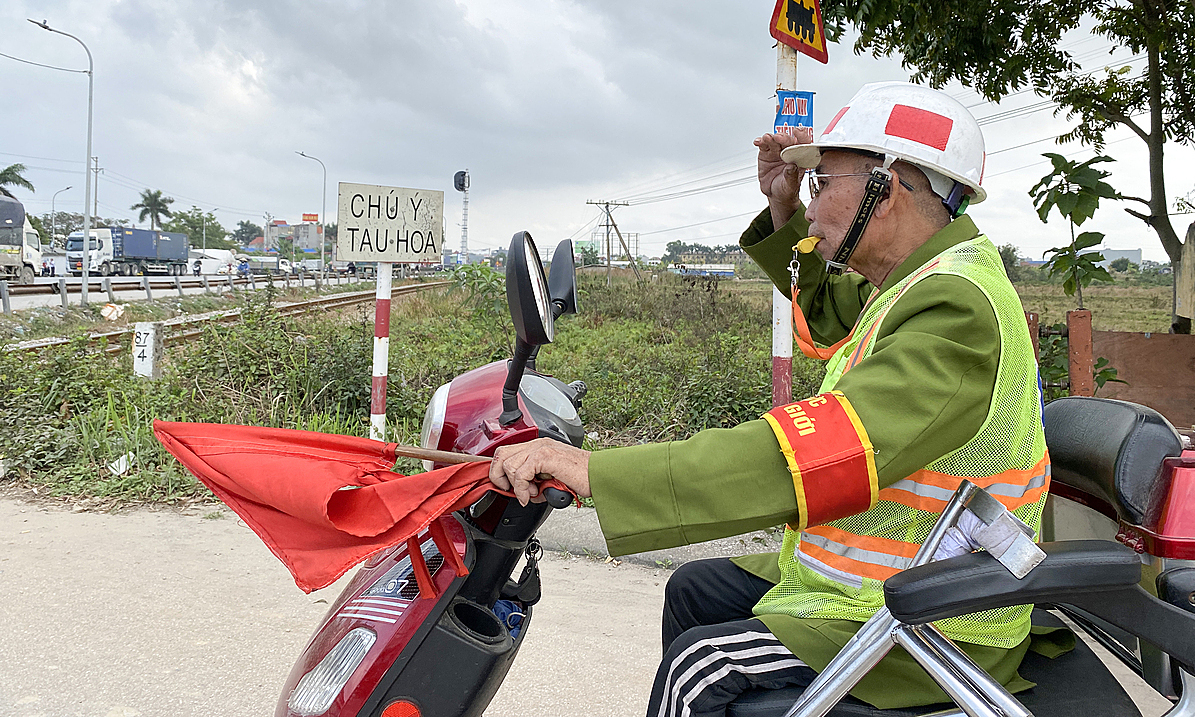 Hai PhongAfter listening to the phone call, Mr. Xa grabbed a wooden crutch and climbed onto the electric motorbike and ran to the middle of the road, waving a flag to signal the vehicles to stop and wait for the train to pass.

“Here they call me barie running on rice,” Mr. Nguyen Van Xa, 76 years old, in Du Nghia village, Le Thien commune, An Duong district, jokingly introduced himself about his 13-year job in the street. crossing the railway at Km 87+375.

“Before I went to stand guard, people called this the ‘crossroads of death’ because there have been hundreds of fatal accidents caused by train collisions. Many times I witnessed white-headed people see off blue-headed people.” Mr. Xa said.

Mr. Xa suffered from polio, his legs atrophied at the age of seven, so his whole life was attached to a wooden crutch. Unable to work hard, he applied to a garment factory in the village. After working in the factory, his monthly salary plus his wife’s teacher salary was enough to feed three children.

When his eyesight is poor, his health is weak, his children are all grown up, he retires, counting at home to enjoy his old age. But perhaps God did not want him to rest, so he “forced” him to constantly witness tragic railway accidents at the intersection at the beginning of the village. In 2009, he hid his wife and children, volunteered to write an application to set up a roadblock when he just turned 63.

When the commune authorities agreed, Mrs. Dao Thi Yen, his wife, heard the news. “Have you run out of things to do?” she exclaimed. “My health is not as good as anyone else, but I still want to go to a deserted place, I am addicted to smoking to hang up the train”. No one in the village believed that the old man with both legs could volunteer to do the work that no one dared to admit. Someone even bluntly told him “to be free to talk nonsense”.

But Mr. Xa did not say a word. Right after the commune’s consent, he went alone on crutches to the open ground next to the train track, and hung four wooden poles, wrapped a canvas as a shelter from the wind and rain. A few days later, he went to beg for a long bamboo tree, strangely sitting and painting each piece in white – red as a barie. That’s how his career as a “living barie” began.

At this intersection, there was no signal light. At first, Mr. Xa had to sit in the hut and listen to the train whistle to use crutches to lower the barie. Later, he got used to it, he knew by heart when there were trains, and timed himself to lower the bar exactly like a real railway worker.

She couldn’t oppose her husband, then seeing that he was determined to do good deeds, Mrs. Yen decided that her husband would go where his wife would follow, to take care of her. So Mr. Xa’s tarpaulin hut has an extra guard on the way.

“From that day until now, I have never seen my grandparents leave the guard post. When there is a filial piety, wedding or unexpected event, they take turns to go, making sure someone is always on duty,” said Quynh, selling drinks on a separate basis. railway 500 m, share.

Having eaten at home and carrying goods for more than 5 years, in 2014, the Traffic Safety Board of Hai Phong City had a subsidy for Mr. Xa, 600,000 VND per month, now increased to 2 million VND. In the same year, the City People’s Procuracy built a house of about 12 square meters for their grandparents to replace the shack, and equipped with a telephone intended to notify the passing train.

Mr. Xa is on duty at the station every day from 5am to 9pm, even though the frequency of passenger trains running the Hanoi – Hai Phong fixed route has decreased from 8 trips to 2 because of the Covid-19 epidemic. “As for the train, I’m still on duty, not to mention more or less. A few months before the epidemic, passenger trains stopped running for a few months. Without the whistle, the train’s interior was also more or less empty,” he confided.

In the past few months, Mr. Xa has received instructions from the City Traffic Safety Committee to remove the barricade, try to stay on guard by standing in the middle of the road, using flags and whistles to signal people. “My legs are paralyzed, I can’t go to the middle of the road, so I bought an electric car to move. The main thing is to ensure the safety of people when a train passes,” he laughed.

Mr. Tran Van Hai, Chairman of the People’s Committee of Le Thien Commune, said that thanks to Mr. Nguyen Van Xa standing guard at the Km 87+375 section of National Highway 5, the number of tragic accidents has decreased. people. “But in the near future, the locality also considers finding a successor so that Mr. Xa can rest and enjoy his children and grandchildren because of his advanced age”, Mr. Hai added.

Sitting for less than 30 minutes, Mr. Xa received a call from a landline phone. “There’s going to be a train going through again,” he laughed, then quickly used his hands to push people from the guard station onto a three-wheeled electric scooter parked near the door, then steered to the middle of the road to warn.

Seeing his old age, early on the day of guarding the train, many people advised him to take a break, but “living barie” shook his head: “Only when I find a successor will I dare to rest, otherwise I will stay here until my last breath. “.

Some pictures of Mr. Nguyen Van Xa guarding the train on the afternoon of January 27.