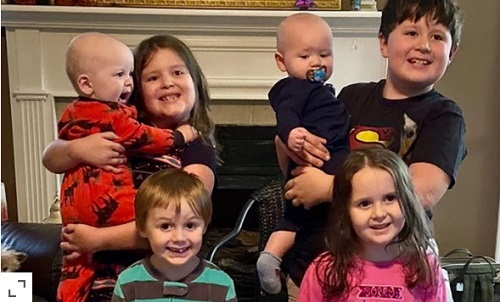 AmericaWhen he noticed smoke coming from the kitchen, Brody Sims shouted the names of his four brothers, tried to get them all out and called 911.

“All I could see was smoke coming out,” the boy recounted the incident at his home in Clarksville, Tennessee, on the afternoon of December 5. He told the children to run out of the house, while shouting the name of the two-year-old youngest brother who was sleeping in the room. When she didn’t answer, Brody walked through the fire, rushed into the room and dragged him out.

While looking around trying to put out the fire, the 11-year-old elder directed his sister to call 911.

“Our parents taught us that if there’s a fire, get them all out and call 911,” the boy explained.

Brody’s mother, Kimberly Sims, said the fire broke out while she was walking the dog to her parents’ house nearby. “I really thank my children because they know what to do in an emergency,” said the mother, a nurse.

Brody was modest: “It’s an action that any eldest brother in the family must do.”

From a young age, her children learned survival skills, trained in first aid, and knew how to do basic CPR. Kimberly’s children all love police programs and care about safety.

Clarksville Police confirmed that when they arrived, the five children had escaped the burning house uninjured. The fire destroyed the home of the family of seven.