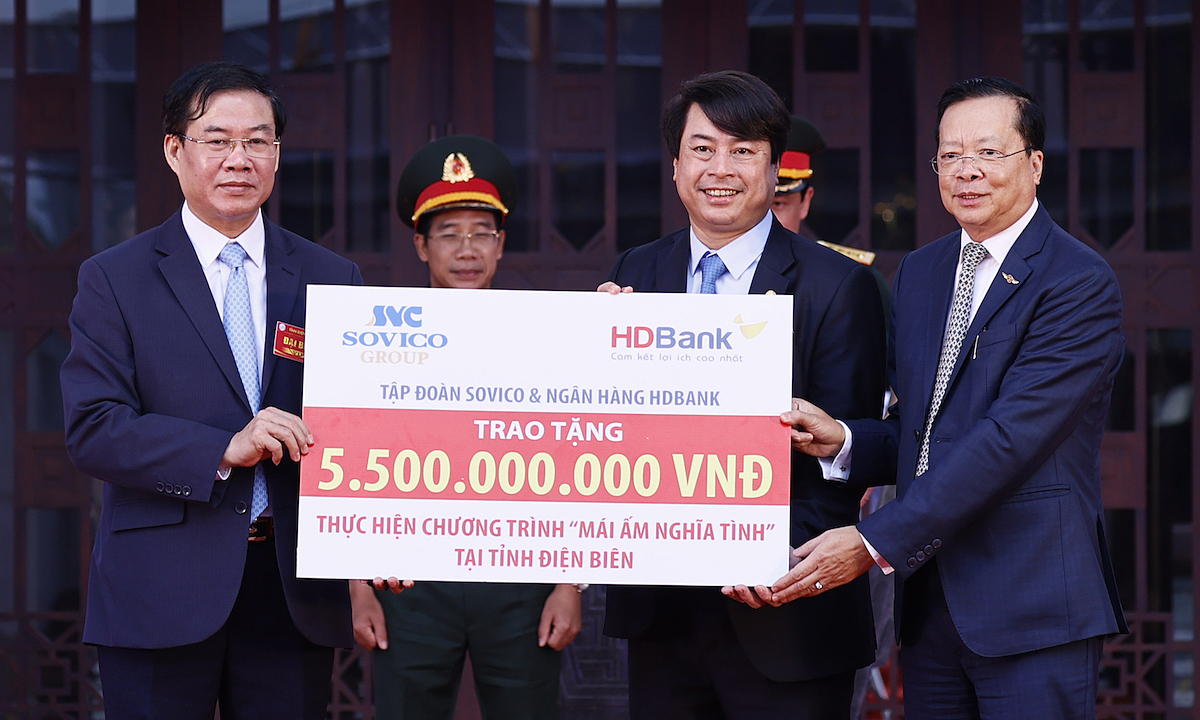 100 gratitude houses with a total budget of 5.5 billion VND sponsored by Sovico Group and HDBank for Dien Bien province.

Funding event took place during the inauguration ceremony of the martyr temple at Dien Bien Phu battlefield and the launch of the program “Shelter of love – social security”, on May 18.

A representative of Sovico said that the funding to build houses of gratitude instead of the feelings of tens of thousands of Sovico and HDBank employees sent to families with meritorious services to the revolution who are facing difficult circumstances in Dien Bien province. . Thereby, the group wants families to have a spacious and solid place to live, creating conditions for stable life, peace of mind in production and economic development.

“Dien Bien is a land marking a heroic period of the nation with many historical sites and scenic spots. This is also the northwestern mountainous border province with many steep and rugged terrain, so it often causes The situation of landslides, often causing damage to people’s houses and properties. Through this activity, we hope to contribute to helping people improve their lives”, a representative of Sovico shared.

Previously, in November 2021, HDBank also donated funds to build 200 charity houses worth 10 billion VND to poor households in Dien Bien province. In addition, the bank has also contributed to the construction of more than 600 houses of love and gratitude across the country.

Particularly in the northern mountainous provinces, HDBank regularly conducts annual programs to donate warm clothes and essential items… to disadvantaged households. In addition, there is the activity of giving scholarships to children through the Vu A Dinh Scholarship Fund and the Vietnam Children’s Fund…

Also at the ceremony, HDBank participated in the launching ceremony of planting trees in response to the project “Growing 1 billion trees in the period of 2021-2025” associated with the development of strategic industrial crops in Dien Bien province. In addition, projects on environmental protection and climate change will continue to be focused by this bank, contributing to improving the people’s quality of life and the sustainable development of the country.

Over the years, HDBank regularly organizes gratitude activities such as visiting martyrs’ cemeteries across the country. Typically, the Day of War Invalids and Martyrs is July 27 and 30 of the Lunar New Year; building a memorial stele for the A210 interchange line in Ben Tre province; held a great ceremony to pray for super martyrs, soldiers and compatriots who died in war…

“During the past 32 years, HDBank has constantly accompanied the community through charity programs. This is also part of the philosophy of sustainable development, building HDBank – Happy Digital Bank – Green Bank, Digital Development Bank. development for the happiness of the social community”, HDBank’s representative added.