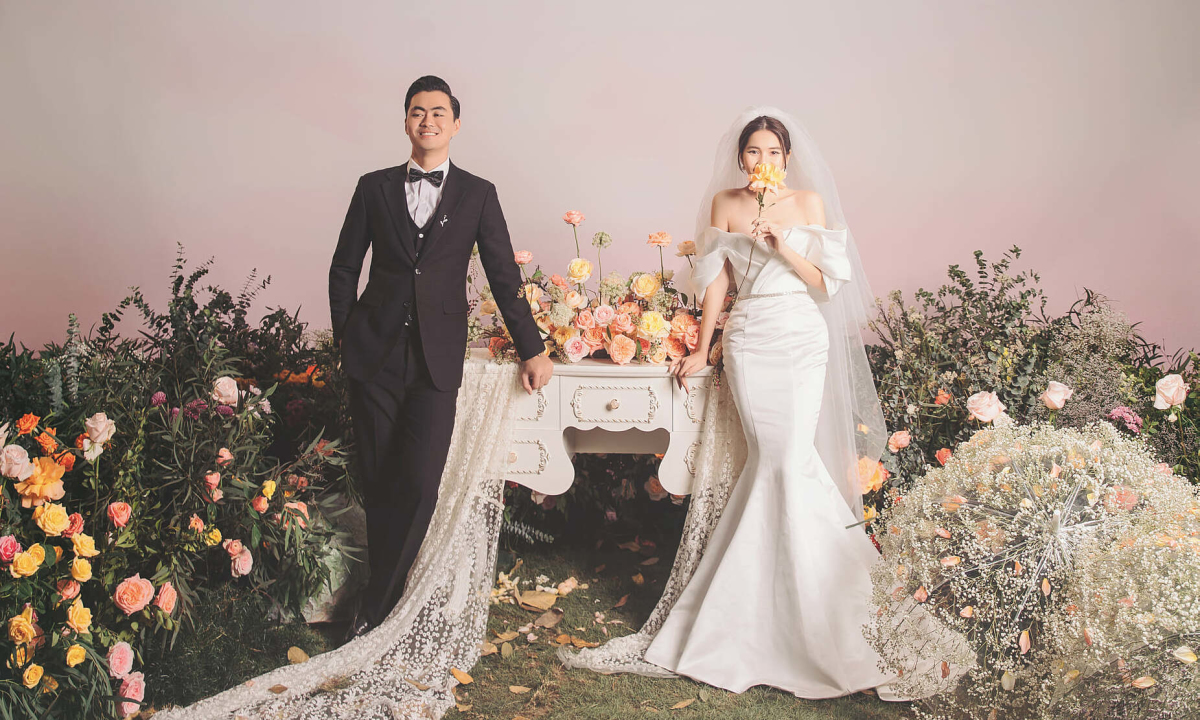 HanoiTo have a unique set of photos to celebrate 10 years together, Manh Cuong and his wife took more than 2,300 hours of shooting with 50 people to support them.

Mr. Trieu Manh Cuong in Ba Dinh district said that the idea of ​​​​wedding photography with 100 different styles has been cherished for many years but has not been able to implement because of busy work. In February 2021, the photographer asked to take a photo with his wife.

“In those days, we took wedding photos simply because the economy was difficult. After becoming a photographer, taking pictures for thousands of couples with all styles and backgrounds. Looking at their wedding photos, I felt moved again. So I wanted to made this photo series as a thank you gift to his wife,” he said.

He and his wife both work in the wedding service industry, have their own studio, the wedding photos of Mr. Cuong and his wife, Ms. Nguyen Thi Phuong Thao, are made by a team of 50 people. Including 3 cameramen, photographers and 47 support people who are all employees of the shop. The shooting location is at the family’s studio on Quan Thanh street, Ba Dinh district.

A month before, the couple prepared hundreds of props, costumes, wedding flowers, and backdrops according to each concept. Bride Phuong Thao has to change 100 dresses, use more than 130 accessories such as crowns, hair brooches, hats, hats, gloves… and countless different ways of makeup and hairdo.

“I have a wedding dress shop, so it doesn’t take time to rent or order. Many of the dresses in the photo set are designed by me”, Phuong Thao shared.

Shooting sessions usually run from 6 a.m. to 11 p.m. On average, perform two to five concepts per day. Each style takes a few hours to change clothes, do hair and change the setting. To make the photo more vivid, Mr. Cuong rented an antique car, ordered thousands of imported flowers, fresh grass, and balloons for decoration. “People were tired of taking a few pictures, my husband and I had a few concepts every day, for four months. Now thinking about it, I’m still scared,” Thao said.

Accustomed to shooting for thousands of couples, but every time he sees his wife wearing a wedding dress, Cuong can’t help but be moved. And Phuong Thao still feels shy, saying that she looks like a bride about to return to her husband’s house 10 years ago. “Mother Thao is so pretty. Parents are preparing for the wedding,” said Cuong’s six-year-old daughter, looking at her parents taking pictures.

Setting a goal of shooting 100 wedding concepts, Mr. Cuong received many mixed opinions. Some say that he plays foolishly, likes to be famous, others say that the requirements exceed the creativity of a single studio.

“But this number has more meaning than that. 100 concepts are also 100 happy and difficult moments that my husband and I overcame together. Wanting to make up for my wife after years of being a solid rear, I made try to do it”, said the male photographer, even though he knows that creating hundreds of different shooting styles is a big challenge. He and his wife and team constantly discuss and come up with ideas to be able to implement new concepts.

After 2,368 hours of shooting, 100 concept wedding photos with about 1,500 photos were completed. “I was startled when the staff gave statistics on the number of working hours, from start to finish. Only during the outbreak period, staff had to be cut, and shooting time was prolonged,” he laughed.

Many people in the profession calculate the cost of implementation up to billions of dong, but Mr. Cuong said he does not place much emphasis on money. “For me, emotion is important. But if I have to spend billions of money on a set of photos, I think it’s worth it because my wife and family are the top priority,” he laughed.

With a variety of photos and shooting styles, in June 2021, Manh Cuong and his wife set a national record for “the most creative and conceptual couple in Vietnam”. Due to the epidemic, on May 17, the new couple attended the confirmation ceremony from the Vietnam Record Organization.