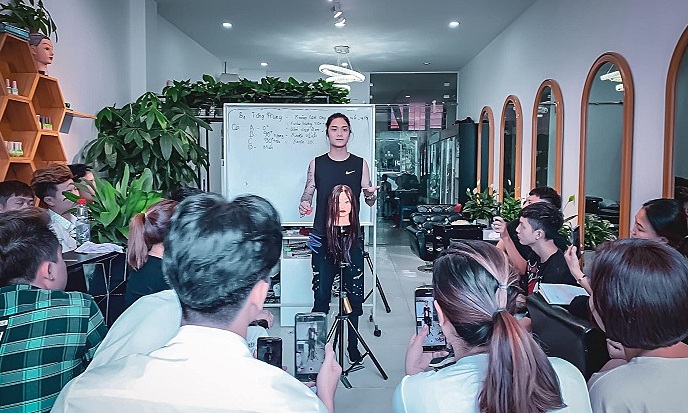 At the age of 16, Hoang Khai was thrown into the pond a few times a week by his father, carrying a pestle around the house to beat him for skipping school and playing games. In the middle of that, he accidentally read a book.

At the end of the year, hair salons are crowded with customers. This is the time to “make money” for the golden scissors, but Do Tran Hoang Khai closes the shop. Currently, he only teaches a few hairstyling courses each month for a cosmetic company.

“When something is not in my plan, even if I know how to make a hundred million, I still don’t want to,” Hoang Khai explained for his indifference. He just got married, so he wants to spend time with his family and prepare for his big plans next year.

Before becoming a plan-builder, Khai was a rebellious child of Do Van Danh’s family in Tien Hai, Thai Binh. Since he was in middle school, he only knew how to burn time, and add money to the game. Every morning, Khai steals his schoolbag, but actually hides to play games, and does not return until 11:00 am. Occasionally, he “disappears” for three or four days, comes back and then leaves. “Sometimes, I ask my parents for a few hundred thousand, say to learn more, but actually go out. Whoever touches is mad, cursing, cursing,” the 26-year-old remembers.

The two oldest children are well-known, so Khai becomes the family’s shame. Counseling, cursing and not listening, many times Mr. Danh got mad and threw his spoiled son into the pond or carried a pestle to fight all over the house. “At that time, the village took care of my wife and my husband. They said ‘if it stays like this, I don’t know where my house will go.’ I thought this son was considered abandoned,” recalled the 54-year-old father.

Even though he passed high school, Khai still stayed all night in the Internet shop. One time, while playing a game, he mistakenly clicked on a link to introduce a book titled “Rich Dad, Poor Dad“The story in the book just kept making the mischievous teenager forget to play the game.” The book awoke me, “Khai.

That night, the “rebellious son” came home earlier than usual, surprising Danh and his wife. All night, Khai ponders what he reads. In the morning, he sits at his desk, analyzing his “life strategy”. There are two routes to choose from: college education and vocational training. Realizing that he was not good at school, he could spend 16 years studying for a salary, Khai chose to go to vocational training. “I will be the boss,” the 16-year-old man made up his mind.

Hearing that he wanted to drop out of school, Mr. Danh did not wait for explanation I just thought that Khai was really spoiled, so he wanted to quit school because he wanted to play. He shouted: “Go away, you die, I still have two children.”

The youngest son took the car to Cam Pha, Quang Ninh, stayed at his friend’s house, determined to “die, not come back”. Khai studied auto repair, but only three days, he quit because he thought it would take at least three years to master the profession, wanting to own it, it takes a large sum of money to open the garage.

Coming to work at the billboard manufacturing store, Khai had to climb the buildings to hang the signboard. Used to dress happily, now he has to climb outside high-rise buildings to find food, Khai is not strong enough. At that time, Khai was only absorbed in what his parents taught, but the young boy’s stubborn nature, he definitely did not call home. “I want to prove my dad wrong. I am a valuable son, not the dead is not as important as he thought,” he said.

Once, when he went to his cousin’s barbershop in a small alley, Khai saw that he cut, curled, and dyed for customers only VND 800,000, while in the street, he only managed 1.2 million VND. “Why?”, The young man asked bewildered. “Because in the street they use more expensive drugs and rent space at higher prices,” the brother explained.

That night, he went to tinker on the internet and found out “the price of hairdressing drugs is not too high, the cash in the street even though more, but the profit is still much better”. The next day, Khai decided to ask his cousin to apprentice.

“I have not seen any apprentice who is as stubborn, stubborn, and insolent as this guy. It drives me crazy. I tell him to cut it round, he cuts it diagonally, says interrupt, he cuts it off again. together with it, it makes the most satisfied customers. That’s new, “said Mr. Tran Anh Dung, his cousin and also the first person to teach the profession to Khai.

After a year, Khai mastered the basics so decided to go to Hanoi while studying and working to see what the “high-class salon” would be like. Khai chose an advanced apprentice teacher and borrowed money to buy equipment such as a salon, and took it to his room for practice.

That New Year, he came home, met his father but did not talk.

At the age of 20, Hoang Khai returned to Cam Pha. He took off the watch, necklace and ring he bought for the year he was in 10th grade, borrowed his friends, a total of 80 million dong, opened his first hair salon. “I want to learn more management experience. To see how I will manage my employees, how to calculate the costs and also to practice skills,” he said.

In the first three months, the customers were few and the expenses were high, Khai borrowed an additional 40 million dong of interest. From a weight of 60 kg, the barber lost 53 kg because of anxiety and frugality. “I still have to be cautious about charging my phone. For every customer I must immediately turn off all the power to save money,” said the young man. End of the third month, customers began to gradually crowd up. At the end of six months, the debt was paid off and a year later, more than 200 million dong was raised. Doing business like a wind, Khai suddenly decided to transfer his store to Hanoi to find a teacher to learn more.

Before going to the capital, the barber returned to his hometown. After a meal in silence, Khai invited his father to the living room to talk. “Thank you dad for being scolded so that I have the motivation to try. I’m sorry for making you sad. Now I’ve changed. I have money to work, so I want to fix my house so that my parents live well more, “he said. Expressing disinterest, the youngest son went through, Mr. Danh watched.

“Thanks to social conflict, learning from friends and self-awareness, he has really grown up, is no longer a ‘runaway boy’ like I used to worry about. Good son, hard-working “, said Mr. Danh.

Right now, Khai’s biggest passion is curling his hair. He opened a salon in Hanoi, and also enrolled in hairdressing courses. The guy has won many awards such as Golden Scissors, Excellent Teacher, .. and is remembered by many people in the hairstylist world.

Currently, he is a technical school of a cosmetics company in Hanoi. Hoang Khai specializes in training students, organizing product launch events for the company. “Through researching the team of professionals, I know that Hoang Khai has expertise, presentation skills, and communication ability, so I invite him to work,” said Trinh Duy Tuan, deputy director of the company.

Next year, Khai plans to open a salon in Hanoi “meeting his set standards”, with more practice rooms to open trainee training courses. “The dream of mastering I have reached. However, the knowledge is boundless, I have to learn every day, think every day, and be more perfect before I can reach success,” said the young man.